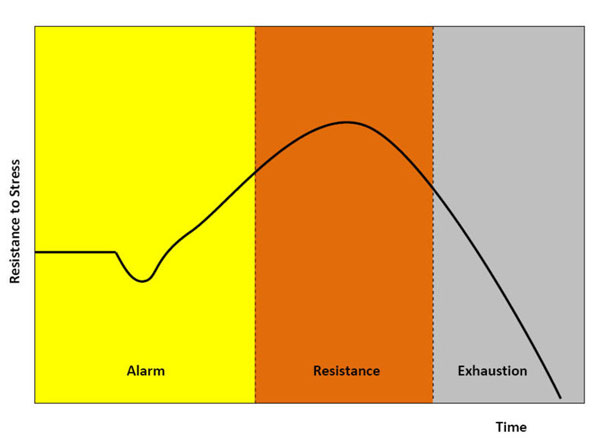 Stress is the body’s biological response to an anticipated threat or an unmanageable demand, whether real or imagined. It is not necessarily harmful, and can in fact be crucial to proper functioning, as it allows a person to prepare for a challenge or the get “revved up” for hard work (or even play).

Stress becomes harmful to the body and brain when it is both prolonged and generalized. In such circumstances, stress results in exhaustion: the breakdown of the body’s systems of adaptation and self-regulation. Exhaustive stress, common to modern living, results in many types of illness and disease. It is estimated that 70% of visits to primary care medical doctors are due to illness resulting from the body’s exposure to both acute and exhaustive stressors!

Hans Selye is credited with the some of the earliest research into the debilitating effects of stress. He studied the effects of stress on rats and other animals by exposing them to threatening, unpleasant or harmful stimuli. He found that all animals presented a very similar series of reactions, broken into three stages. In 1936, he described this universal response to the stressors as the General Adaptation Syndrome, or GAS (see Figure above).

The first stage is called “Alarm”. When the threat or stressor is identified or realized, the body’s stress response is to increase activation and arousal, bringing about a state of alarm. It is now known that these changes are controlled by the part of the brain called the limbic system, also referred to as the “fear center”. During this stage adrenaline will be produced in order to bring about the fight-or-flight response. There is also some activation of the hormonal system (the so-called “HPA Axis”), producing cortisol. Note that in addition to overarousal, excess cortisol has been shown to cause weight gain, premature aging, and many other harmful consequences.

Following the Alarm phase, if the stressor persists, the body adapts by entering the Resistance stage – the second phase – as an attempt to cope. Although the body does adapt somewhat to these strains or demands, it cannot keep this up indefinitely, so the body’s resources are gradually depleted.

Exhaustion is the third and final stage in the GAS model. At this point, all of the body’s resources are depleted and the body is unable to maintain normal function. If stage three is extended, long term damage may result as the capacity of glands, especially the adrenal gland and the immune system, is exhausted and function is impaired resulting in decompensation – a psychological and medical term for serious inability to function.
The results of exhaustive stress can manifest in expected illnesses such as ulcers, depression, diabetes, gastrointestinal distress and cardiovascular problems, along with other mental illnesses. Many of the conditions treated by ABF are the direct result of exhaustive stress.

Most medical treatments for stress involve prescription drugs such as Xanax or Paxil. These can be addictive, have side effects that are worse than the experience of stress itself, and only cover up the symptoms.